NO TAX HURDLE FOR INTEREST-FREE LOANS! 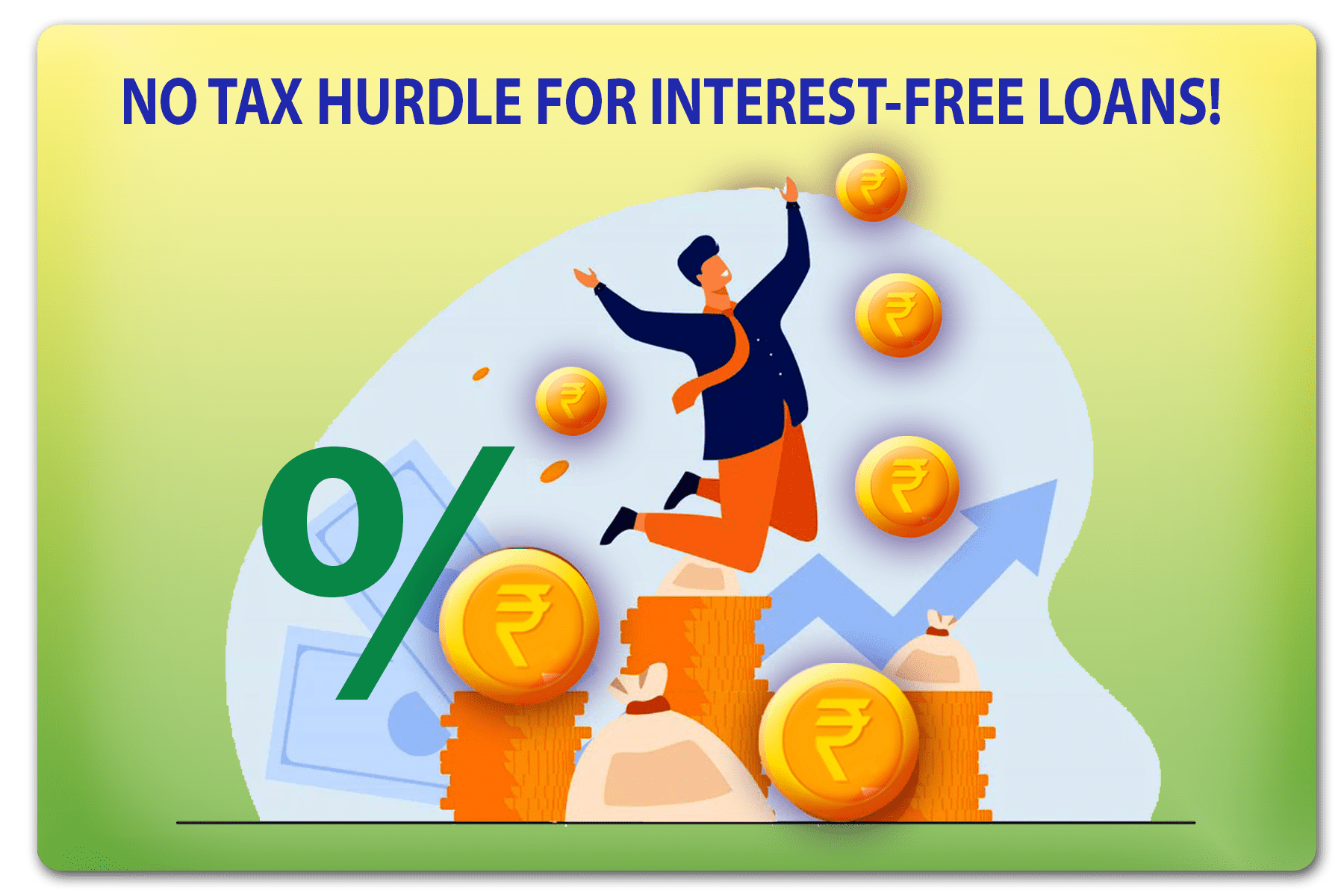 Can the Taxman compute any Notional Interest
in respect of your Interest-free Loan?

Interest-free loans to family members from your own funds can go a long way to lawfully reduce your tax burden! If you have advanced an interest-free loan from your own funds or from borrowed funds on which you are under no obligation to pay any interest, the Taxman cannot question your decision for not charging any interest on such loan advanced.

In a fitting tribute to a smart taxpayer’s instinct of lawfully saving tax, discussed hereunder are replies to two very interesting reader’s queries:

Query: I had received Rs.60,00,000 as my retirement benefits in 2017. Out of the same, I advanced interest free loans of Rs.15,00,000 to my wife and Rs.10,00,000 to my HUF. They invested the same in Deposits with an NBFC earning interest at 8% per annum. In my scrutiny assessment for Assessment Year 2020-21, my Assessing Officer has raised the issue that the interest income of Rs.1,20,000 earned by my wife and Rs. 80,000 earned by my HUF is liable to be clubbed with my income. He has proposed to invoke the provisions of Section 60 of the Income-tax Act alleging that this is a case of transfer of income where there is no transfer of assets. Alternatively, he has proposed to tax in my hands notional interest income of Rs. 2,00,000 at 8% per annum on the interest free loans of Rs.25,00,000, on the ground that I have not earned interest which I could have so earned. Kindly advise whether my Assessing Officer’s action is justified?

Reply: The stand taken by your Assessing Officer on both the counts is clearly unjustified and legally untenable. Infact, the Income-tax Appellate Tribunal (ITAT), Ahmedabad had occasion to consider a similar situation in its decision rendered in the case of ‘ITO v/s Nalinbhai M. Shah 149 Taxman 48 (Ahd.)’ wherein it has clearly held that “a taxpayer is entitled to use his capital as per his desire.”

The Tribunal went on to hold that in a simple case of interest-free loans and advances given by a taxpayer to his relatives, Section 60 is not applicable since it is not a case of transfer of income without transfer of assets.

In this regard the ITAT usefully referred to the judgement of the Gujarat High Court in the case of ‘CIT v/s Manharlal Girdharlal Doshit’ 231 ITR 89 (Guj.). The ITAT further noted that, “this was not a case where the taxpayer had diverted funds out of a borrowing on which he was paying interest and therefore, not a situation which called for disallowance of any interest paid.”

On the other aspect relating to whether any notional income can be taxed in your hands in relation to the interest free advances, you may like to usefully rely on the ratio of two landmark judgments of the Supreme Court as cited hereunder:

Query: I had advanced an interest-free loan of Rs. 7,50,000 from my own funds to my Hindu Undivided Family. During the course of my Income-tax assessment proceedings, the Assessing Officer has questioned my decision of having given the interest-free loan and has proposed to add notional interest of Rs.90,000 (@ 12% per annum on the loan of Rs.7,50,000) for the purpose of finalizing my Income-tax assessment. Is this action of the Assessing Officer justified?

Reply: Your Assessing Officer is clearly not justified in attempting to tax notional interest in your case as proposed by him. In this regard, you may usefully rely on the direct judgement of the Gauhati High Court in the case of ‘Highways Construction Company Pvt. Ltd. vs. CIT’ 199 ITR 702 (Gau.), which has been followed in the case of ‘Keshrichand Jaisukhlal vs. CIT’ 122 Taxman 307 (Gau.).

The settled legal position in the above regard is that if a person advances an interest-free loan from his own funds or from borrowed funds on which he is under no obligation to pay any interest, the Income-tax Department cannot question the decision as to why the person has not charged any interest on such loan advanced.

INVESTMENT PLANNING – THE GUIDING STARS
May 3, 2022